It was a warm, sunny day early in the chukar season.

I was hunting through some rimrocks high above the Snake River.  I had brought my six-month-old pup along to watch my older dog hunt, hoping she would learn something by osmosis.  My pup would walk behind me as much as she would be in front.  Long climb for tiny little puppy legs.

I had just came around a ridge and was hunting between two sets of rim rock.  My older dog was working the tall bunch grass in front of me.  I did not see my pup, so I stopped and turned around to see if she was keeping up.  She was not there.  I first glanced at the ridge behind me thinking I really didn’t want to walk all the way back there looking for her.  I called her name and no response.

I started to make my way back to the ridge when I caught a glimpse of her out of the corner of my eye.  She had made her way down the hill about 30 yards and was locked up tight pointing into a small bunch grass shoot between the short rimrocks.  My smile was so large I almost tripped over it making my way down the hill to her.

The birds flushed below the rimrocks as I approached.  They were out of sight before I could shoot.  The memory of my pup frozen like a statue as the bunch grass swayed in the breeze is so vivid, I can feel the sun warming my face as I tell the story. 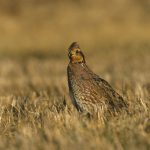