To the Rescue… My Love Affair with Rescue Setters Part II

Fearing the worst, I discussed the matter with Miki. We had three setters but two were very old and probably would soon be gone. When next hunting season arrived, we might have just one. And if that dog got hurt, I couldn’t face hunting alone.

So, back to Miki’s rescue group. Within several days, she found a prospect. This one was a young male that, except for a little orange ticking, was almost pure white. His Internet listing had two attributes I really liked. First, he was listed, almost negatively, as a high energy dog. Second, one of his photos showed him locked up on a butterfly. This was the dog for me and I would name him Smoke.

We submitted the adoption forms and were quickly approved. When we picked him up in Connecticut, it was immediate love once again. And just like Patch, his head in my lap all the way home.

I quickly realized that Smoke had had substantial training. He came, sat, heeled, always stayed close, and loved the shot of a gun. Better yet, he spent all his time outdoors scenting and pointing squirrels and song birds. I was very impressed and excited. But, it was only December and 10 months before the next year’s hunting season opened. I just couldn’t wait.

I had heard about a shooting club nearby where the coverts were much like my own in the wild. I never shoot at preserves. I’m strictly a wild bird hunter and love tromping through the brush, but I decided to make an exception. I called and set up a date. I had high hopes for Smoke but knew in my heart that his first outing might easily be a disaster.

The morning came and we excitedly loaded Smoke into the truck. The 70-minute drive seemed to take forever. Finally, we arrived at a picturesque New Hampshire farm. With planted fields intersected by brushy woodrows, there was plenty of cover for birds. We met Scott, the owner, and decided to put out six chukars. I felt that they most resemble a ruffed grouse in flight. Smoke with bird three feet away.

Scott disappeared and soon returned driving a large ATV with a stack of loaded chukar cages in the back. He was headed out to plant the birds. I let Smoke out of the Jeep and he got a whiff of scent. Then WHAM! He locked up from about 30 yards away.

Then something happened I will never forget. Scott started driving down the hill. Smoke broke point and chased the ATV. Catching up with the vehicle, he jumped up on top of the cages and went back on point. And off they went, Scott at the wheel, chukars in back and Smoke on top of them, solid as a rock!

Scott stopped the ATV and I grabbed Smoke. We waited at the lodge while the birds were released. Finally, we started down to meet him and he explained that the chukars were in heavy undergrowth in the next field over.  We came through the woods to the edge of the field and I unleashed the straining dog. He quartered ahead of us out about 30 yards. Suddenly he stiffened, nostrils flaring. I got behind him as he slinked forward. With one more step, he was locked on the bird. And, 15 feet in front of us, I could see feathers twitching in the thick grass.

The chukar flushed and I fired a lucky shot. Winged, the bird soared, then crumpled 50 yards away. Smoke watched it drop and then went in pursuit. To my absolute amazement he brought it right to my hand! Praise the Lord!

After three similar points and fetches, I told Scott we were finished. I would spare the remaining chukars their lives. I had learned all that I needed to know about the new pup. Better to stop there. It looked like he had the potential to be my best setter yet. I couldn’t contain myself as we headed home. I had a dreamy night envisioning future days afield.

Speaking of sleep, a new problem arose. You see, Miki and I have always had the setters with us in the bedroom at night. They all take turns napping at our feet. One dog was great. Two still worked. Three got crowded. But now we had four…

As expected, the ultimatum came. One evening after Smoke arrived Miki announced: “You know, I just can’t take this anymore; I need to get some sleep! The setters have to be off the bed at night or I am out.”

I gave this great consideration. I tossed and I turned. Finally, I redecorated the guest room in her favorite colors. Now she’s across the hall and everyone’s content. And, happily she comes in for visits…

EPILOGUE: I say without hesitation that Smoke’s the best bird dog I’ve ever had. He does it all: works close, holds on point until the flush, is a fantastic retriever marking each kill and is steady to wing and shot. We hunted Maine, New Hampshire, and western Massachusetts about 30 days this year. Despite tough weather we had our share of luck, with Smoke preforming flawlessly on every bird. We finished the season three miles from my from my house in New Hampshire on New Years Eve. In what I call the “View Covert” Smoke pinned a pair of grouse six feet from his nose in heavy brush. Staunch as ever he held as the birds flushed. I missed of course. It was 3:45 pm. The season ended at 4:16. Oh well, they’ll be there next season. Something to dream about as Smoke sleeps at my feet.

Author’s note: Because rescue setters have been shunted around to various temporary homes, they desperately need a permanent home for life. You will sign a contract to this effect if you adopt one. I have been incredibly blessed with mine. However, many will not hunt. It is a big commitment and remember this if you plan to proceed. 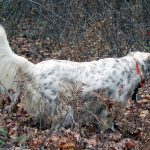 To the Rescue… My Love Affair with Rescue Setters Part IFeature 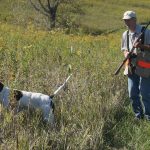 Pointing Dog Pointer: The Nuts and Bolts of Starting Your Pointer PupFeature