In last month’s column, we encouraged you to develop the “eye of the tiger” in your young pointing dog in his first season. Finding birds on his own, having fun, and “having his head” without a lot of pressure are all ingredients to instilling that special gleam in your pup’s eye. If you can do that, you’re on your way to many more successful seasons! Using the checkcord, remind your dog to pay attention to where you are going.

The first season is also an important time for you, as your dog’s partner and handler. If you’ve worked hard at reading your dog while developing her, you’ll likely notice a few issues as the first season progresses. We prefer to call them challenges rather than problems, but key to addressing these challenges is to first notice them—and then do something about them.

One of the most common issues our clients have in the first season is handling. This may not crop up until the season is nearly over, or, if your dog already has the eye of the tiger, it may become a challenge early on.

One fall, we finished a young started dog that was full of enthusiasm and ready to learn to partner with her owner. This young wirehair did it all: She ranged with enthusiasm, had a great nose and solid point, and—in her field demonstration before her owner took her home—found and retrieved a shot pheasant that had gone down in the woods next to the field where she was working. Needless to say, her owner was thrilled. He was ready! Opening day for bird season was the next day, and he’d made plans with his buddies to take her out and show her off.

Even though we understood his excitement, we cautioned him against taking his young dog out on opening day with his friends. We explained that he needed time to bond with her again to get a feel for handling her—alone, just the two of them.

Long story short, we didn’t hear from our client until January. Sheepishly, he told us that he was having a handling problem with his wirehair and asked for our advice. We inquired as to when the handling problem had begun. “Opening weekend in October,” was his reply. Enough said!

Training pointing dogs often seems contradictory. First, we tell you to let your dog get out there and find birds, almost to the point of being an outlaw. Then, we tell you to put some control in the dog! But if you think about it, you wouldn’t need to work on the control if you didn’t first fan the flames of the eye of the tiger! A dog that hangs by your side right from the start, looking up at you, isn’t going to get out and find birds. So first, like a young child with a big piece of paper and finger paints, you let your dog have fun without restraints, so he learns what he’s out there to do.

Some dogs will have the eye of the tiger and still range the distance that you want, even checking back with you regularly. Others will love the freedom of the hunt, and gradually listen less and less to your whistle or call. Some may even start to self-hunt.

There’s no canned program or right way to train your dog because each pup is different. One thing we do believe and emphasize, though, is that during this first season, you do not want to use an electronic collar to solve a handling problem. There’s a time and place for certain kinds of training, and the first season is not the time to introduce the collar to a young dog as he’s finding his way. The e-collar is an excellent tool for control work, but in this first season, it could cause more damage than good.

So what to do if your dog is ignoring you? Go back to basics with your yardwork to reinforce control.

As always, you need to go back to the basics. Look at our client who went out with his dog on opening day, just after he got her back. He didn’t take the time to run her through the basics of yard work: Heel, whoa, and here. He didn’t take her out in the field, on a checkcord, and remind her to respond to his direction. Instead, he let her go and assumed she was going to do for him what he saw her do for us. Plus, with other people in the field giving his dog commands as well, she soon learned not to listen to anyone. And though she hunted with zest and drive, the challenge of her lack of handling was not addressed at the start, like it should have been.

Get out your checkcord and start reminding your young pupil that you are still in charge of the show. Take your dog to a big yard or field with lower cover and keep birds out of the equation. You are focusing on handling lessons here.

Start by going back to the basics of quartering, using your voice and whistle, and remind your dog as you pop the checkcord to change direction as you indicate. If your dog is fairly bold, even hard-headed, you’ll want to have these sessions often, in addition to your hunts. The challenge here is to be able to enforce your command—thus the checkcord.

For a period of time, you may have to let your dog hunt while dragging a checkcord, to re-establish control. We’ve had clients whose dogs worked the field dragging a checkcord for a good portion of the first season. It’s not always easy to do this, but well worth the effort. You want to be careful to work in areas where you can see your dog and keep tabs on her. It may even be necessary to be holding the other end of the checkcord at all times, for a good while as well, if you can’t trust your dog not to bolt off.

We can’t emphasize enough the importance of a game preserve when you are trying to establish control in your dog while hunting. At the preserve, you’ll ensure that there will be birds out there for your pup to find, you can choose easier cover to hunt (and train) in, and you’ll have better control over hunting conditions.

After you’ve done your reinforcement training and your dog seems to be responding well, keep up with those extra sessions in the field or yard, without birds. As your dog ranges out and responds to your signal to changes directions, add the here command now and then, and make your dog return to you. Don’t do this too often, just enough to remind him that when you call him to you, he should always respond.

Again, if you’ve read your dog well during your development training, you can watch for signs that might indicate if you are focusing too heavily on control, such as the dog dropping his tail, showing a lack of enthusiasm, or starting to hang too close to you. It’s a fine line between instilling just enough control while keeping the pup’s enthusiasm at fever pitch.

There’s a reason why we call it the first season! During this period your dog may often test you while learning the ropes and having new and fun experiences. Remember that you are setting the stage for the many seasons to come! Use patience and gentle but consistent reinforcement now. Your young dog needs your guidance, tempered with restraint, to keep her on track and still keep that eye of the tiger burning brightly. Watch your dog, learn from her, and help her to become the best pointing dog she can be. 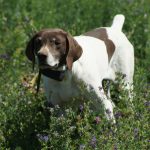 Pointing Dog Pointer: The Eye of the TigerFeature 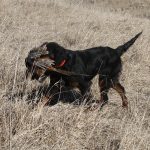