Now that you have your pup bird crazy and handling fairly well in the field, it’s time to develop pup to the gun. This process is a crucial aspect of his training and should never be rushed. The old saying “an ounce of prevention is worth a pound of cure” is especially important when applied to your pup’s gun development.

During gun development, we encourage pup to chase.

We want to make sure our pups are chasing birds with gusto before we even think about the gun! And even though our pup is a pointing dog, right now we want him to continue to chase as we develop him to the gun. This is because we want his mind on only one thing: the bird – not the gun.

In order to prevent any gun-shyness problem with our pups, we go through a series of steps in the progression of gun development. During this progression, we are always watching our pup, reading his reactions. If at any time we see him hesitate, drop his tail, lose interest in the bird, or quit chasing, then we know we are going too fast for this particular pup. In order to keep our pup enthusiastic about the birds and continuing to chase them, we have to back up in our sequence as far as necessary. Time frames will be different with different pups. It generally takes at least a month of weekly sessions to develop a young pup to the gun, but it could take longer. Remember, it takes as long as it takes – there is no set timetable!

We start out by clapping our hands together as pup is chasing the bird in the field, then we gradually move to clapping together two 2”x 4” blocks about five inches long. Next, we use a small popgun, fired as the pup is chasing the bird. From there, we will go to a 22, first shooting into the ground next to us, and in subsequent sessions, into the air. After that, we use a 32-blank pistol, again firing into the ground first, and later, into the air. Then comes the 410-, 20-, and 12-gauge shotguns.

During this progression of noise, it’s important to only make noise or shoot as the pup is chasing the bird and is a good distance away from you. The reaction we are looking for is no reaction to the gun at all – we don’t want the pup to even notice that we have fired. We want him to be intent on the bird only. This is why, at this stage, we encourage pup to chase and focus on the bird. You want your pup chasing that bird!

Starting Pup on the Gun in the Field

Developing your pup to the gun is done in the field and with plenty of birds to keep him focused. For your training sessions, you’ll plant a couple birds as usual, using either quail or pigeons. Initially, we like to use quail as they will often come down some distance away and will keep pup’s enthusiasm up as he searches again. Planted pigeons will work well, but as they are flushed, they will fly up and away, and sometimes a young pup will lose his interest and, as you shoot, he may pay more attention to the noise than the bird.

During each session, you’ll plant your birds first and bring pup into the field to find them. As he scents each bird and points, flush the bird and then let pup chase, dragging the checkcord as he does. Once he’s a good distance away, clap your hands or the blocks together. If he continues to chase the bird, that’s good! Don’t overdo this; a couple of bird finds and chasing with the noise progression are fine per session. You’ll continue in this manner, gradually increasing the level of noise as the pup lets you know it’s OK! Pup is ready to take off and won’t have her mind on the gun.

We also carry a few pigeons or hobbled quail in our vest during these training sessions. Occasionally, as pup is casting about after his first bird finds, we may release a bird from our vest after showing it to him as he runs past. As the pup chases the released bird, it’s another opportunity for us to clap hands or blocks, or shoot the appropriate level of gun.

Another way to reinforce this training is to again catch our pup’s attention as he runs in the field during his session, toss out a hobbled quail, and clap or shoot as he chases. Many pups will run to the hobbled bird and pick it up. Since you’re letting your pup drag a checkcord during these chase sessions, you can pick up the checkcord and guide the pup to you with the bird. We are not concerned about pup’s retrieving ability at this time – if he retrieves, great, if not, that’s OK too.

If at any time your pup hesitates, quits hunting, drops his tail or returns to you, these are signs you may be going too fast. Remember, you want to make sure that pup is a good distance away from you as he chases the bird before you make any noise.

What About Gun Shyness?

Gun shyness is generally a man-made fault. Some pups are quite soft and can be made gun shy easily. Pups can become gun nervous or gun shy when pushed too fast in the progression of gun development, or when they are introduced to gunfire at a shooting range or similar situation where they are supposed to “get used” to the noise. Some folks bang pots when the pup is eating or playing to accustom pup to noise. As trainers, we’ve never looked forward to the Fourth of July fireworks of some of our area residents who shoot off their own – some sounding like sonic booms – sure to frighten the young pups in our kennel. House dogs, too, are often traumatized by fireworks. It’s best to not make a big fuss and try to have deflecting white noise available or quiet spaces for pups during fireworks time.

We’ve all known owners who have “lucked out” with their dogs by just going out and shooting over them. But over the years, we’ve had many a client who brought their gun-shy pointing dog to our kennel – some we were able to “cure” and some, not so much! Why take that chance?

With all the years that you’ll partner with your pointing dog in the field, taking the time to properly introduce and develop your pup to the gun is just a drop in the bucket, and time well spent. Be sure to read your pup’s responses as you progress through his training, and back up or move ahead according to what pup is telling you. Even when you feel that pup is now “gun broke” – you’ll need to use care during his first season or two. Too many guns, shooting birds that pup is not working, shooting more than once or twice at a bird – these things and more can set you back and make your pup gun nervous or gun shy.

Take your time, be patient, and all should go well! 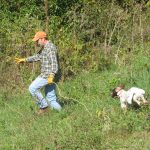 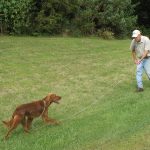