POINTING DOG POINTERS: Blinking – Is There a Cure?

What is blinking? How is it caused? Can it be cured?

Of the many problems we’ve encountered as dog trainers, blinking can be one of the toughest to pinpoint and resolve. For one thing, it’s often difficult for an owner to recognize blinking in his dog. Signs of blinking may hide under the guise of bird shyness, lack of interest in hunting, seemingly timid temperament, and a poor nose. And although we’ve had dogs with this challenging problem over the years, it’s not always an easy one to fix. And sometimes we can’t fix it. This dog shows drive and is eager to hunt

Blinking is usually hard for the average person to detect. Often an owner will think his dog just hasn’t scented the bird or maybe has an inferior nose – or maybe the pup needs more experience, or more confidence, or more training. But in general, it’s safe to say that the dog that blinks has had some sort of unpleasant association with birds. Too much control or advanced training early on, too much pressure on a young dog, improper introduction to birds or the gun, very limited bird work in the development process, use of the e-collar in conjunction with birds – any or all of these things, which are often man-made problems, can result in blinking.

Regardless of how it was caused, a pup’s genetics play a large role in helping to overcome blinking. If the pup lacks innate prey drive or what we like to call “the eye of the tiger,” it is much more difficult.

Some Signs of Blinking

A dog that blinks may show a lack of enthusiasm for going out in the field. Then, when in the field, he might seem as though he wants to hunt (almost against his will). It may be half-hearted, but it’s as though his instinct wants to prevail. Since we’ve planted a bird or two ahead of time, we know where the birds are and we’re also watching that the wind is right for the dog to find the birds.

We’re currently working with a German wirehair pointer, Calllie, that has this problem. Callie is not her owner’s first hunting dog of that breed. In the past, his dogs have come on well and been good hunting companions. At two years of age, Callie has had limited experience with birds, is used to an e-collar for control, and has been exposed to noise and gun work. She likes to retrieve and play with a dummy at home. She’s a sweet, happy, and good-looking dog. A couple sessions at the game preserve on quail and chukar resulted in Callie tucking her tail in the field and lying down at first scent of the bird. She had also bolted after a deer on one occasion; hence the use of the e-collar for control.

We hobbled and hid a couple quail in the tall cover next to our driveway. Removing Callie’s e-collar, we put a light checkcord on her and headed down the drive into the wind. We knew right away that she’d scented the quail. She flash-pointed briefly and then kept going, trying to head to the opposite side of the drive, away from the first bird. When she also blinked the second bird, we grabbed it, unhobbled it, and let it run and jump in front of her. Callie showed some interest then, almost reluctantly. But the dog that loves to retrieve her dummy just sniffed at the bird and didn’t try to pick it up.

What to Do With the Dog That Blinks

Callie’s first session told us the story of what we needed to do. This two-year-old had to become a puppy again – with no e-collar, no gun work, absolutely no pressure, and maybe even no checkcord at first. At this point, she could do nothing wrong in our eyes – everything had to be positive and, if possible, fun – with no discipline at this stage. The only constant in our upcoming sessions would be quail, lots of them. Quail are excellent to build enthusiasm in the young dog

And bird traps were also out of the equation. In our first field session, Callie got out of the dog crate without excitement, tail down, and stood facing the field. We had to urge her forward to find the quail we had planted, close by, under a trap. When she made scent, she lay down. Any sweet talk or urging had no positive effect.

From then on, we kept things natural in planting the quail, using only our “bag spinning” and “dead planting” methods. We worked in the same field for nearly a month, on about three quail each session, twice a week.

Callie began to look forward to riding in the crate in the dog cart to get to the field, barking with excitement along the way. Hearing quail call shrilly when taken out of the game bag excited her a lot, so we used that to ramp up her enthusiasm. She would bound out of the crate and into the field, tail up, ready to hunt. As she found quail, she pointed, also with her tail up. If the quail was not a good flyer, this helped to excite Callie and she chased as the quail went up and then down, up and then down. We did not overdo this; she still hadn’t “grabbed” the quail like we want her to do. So, after a short “chase and find session,” we picked up the poor flyer and moved on to the next bird.

Early on, Callie would jump back at the flush and flight of a good flying quail. She’s not doing that anymore; instead she will chase the flyer some distance away. This spurs her enthusiasm to keep hunting. Initially we used a lot of sweet talk and verbal praise. As she comes along, we are talking less and staying quieter. We keep just two people in the field with her. As she hunts along, we might release a pigeon from our vest, after getting her attention, showing it quickly to her before letting it go. We are trying everything we can to pump her up and keep her that way.

Field sessions shouldn’t be too long. If we see her enthusiasm diminish, that’s our cue to end the session on a good note. There’s always the temptation to continue a session, but remember: less is always better. The dog will remember a positive, short session. A long mediocre workout will not help!

This week, we changed the grounds where we work Callie. We want her to understand that there are birds in other fields. Dogs become pattern trained quickly; our goal of getting her out from under our feet was realized in the first bird field, but it’s now time to move on. Initially, she was intimidated by the new, more open grounds. After finding the first quail, she gave chase and began to hunt, finding a couple more. We want the pup to chase the bird

It’s important in this process to keep moving ahead in the field. If Callie doesn’t find the first bird, we just continue on in a forward line to the next bird, and so on. More and more, we want to turn over the handling process to Callie’s owner. Whatever the inadvertent cause for her blinking, she needs to work happily and fearlessly with him. If all goes well, we’ll reintroduce the gun when Callie lets us know it’s time. Finally, we hope to transfer all this to sessions at the game preserve.

Will Callie make it? Only time will tell.

Going back to the basics of “puppies can do no wrong,” removing all training pressure, and keeping sessions short, fun, and positive will certainly help. Most important, however, is using quail – and lots of them! Without quail, Callie wouldn’t be where she is now. 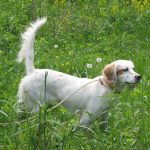 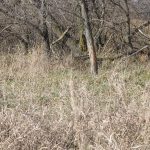