Range and ground pattern are often the subject of lively debates among pointing dog enthusiasts. Is there a difference between the two? Does one affect the other? Can either of these be taught?

Determine the type of cover you like to hunt.

Simply put, range is how far out a pointing dog ranges when he hunts. Factors that determine a dog’s range include genetics, habitat or cover that the dog is hunting, and the distance (range) that the dog’s owner wants him to hunt at. If a dog has the range of a field trial champion, streaking out across the horizon, this inherent trait can be modified through training. But if a dog is naturally close-working, it’s more difficult to push him out. We often say that “we can shorten a dog’s range, but we can’t put range into a dog.”

Ground pattern is demonstrated by the way that the dog hunts in the field. Unlike the flushing dogs that hunt enthusiastically within shotgun range, pointing dogs are supposed to get out and hunt the birdy objectives, whether in gun range or not. Their ground pattern won’t be as rigid as the flushing dog. Instead, a pointing dog will range out with the highest motivation – in a forward pattern, always in front of the handler, never behind. He should complete his casts with drive and enthusiasm, not pottering about or getting sidetracked.

In the beginning, we teach our pointing dog pups to quarter, like the flushing dogs. Quartering is similar to the pattern of a windshield wiper on your car – right, left, right, left – taught at close range, using a checkcord and whistle. If we want our pointing dogs to get out there and hunt the birdy objectives, why do we start with quartering? Quartering will teach pup to respond to your direction, to pay attention to where you are, and will help you to control the range you’d like your dog to hunt at as he matures.

If our pup comes from “big running stock,” and we want him to range far out, early quartering work is a way to instill some control in an easygoing manner, setting the stage for later control work without dampening his drive. Even if we want our pup to really get out there on the horizon as he progresses, we still need to instill some handling control.

To teach your pup to quarter, you’ll need a field or large area with lower cover that’s easy to navigate. You won’t use any birds for this training. Use a slip or choke training collar attached to a sturdy, rope-type checkcord about 20 feet long, which will slide through the cover easily. Don’t use a longer checkcord, as it is difficult to make effective corrections if the checkcord is too long.

Start out in a forward pattern with pup and let him head out where he wants to go. Each time he reaches the end of the checkcord, walk off to the right or the left, briskly snapping the checkcord at the same time as you give a short “pip” on your whistle. As pup responds, walk a short distance before you change to the opposite direction, again giving a short pip on the whistle. Soon he’ll get the idea that it’s time to turn when he hears the whistle, and you can start adding a sweep of your arm in the direction that you are going, at the same time as you whistle. Keep these lessons short and positive. Before you know it, you’ll have laid some basic groundwork for control in your pup and also acquainted him with a quartering ground pattern to work from.

First off, remember that you have a pointing dog! Don’t get too excited if your pup ranges out farther than the spaniel you hunted over as a kid. He’s supposed to get out there and do the legwork for you, hunting the likely areas where the birds are, finding them, and pointing them until you get there for the flush. It’s important to determine what range you yourself feel comfortable having your dog hunt at, and what birds and areas of cover you want to hunt. As they mature, many dogs will adjust the range they hunt at to the cover they are hunting in.

Range is largely genetic, and it would be a good idea to research your pup’s pedigree and see his parents at work before you decide on your particular pup. There are pointing dog breeds and strains of different pointing dog breeds that are bred to work more closely than others. Others, particularly field trial bloodlines, focus on dogs with lots of “run.”

If, however, pup is a “boot polisher” and you’d like him to get out from underfoot, this doesn’t mean that there aren’t things you can do to help your dog range out farther. Before you begin your quartering training, you’ll want to get this close-working pup out on birds to whet his enthusiasm and get him hunting. Though initially you will plant the birds closer to make them easy for him to find, as you progress, you’ll want to plant the birds farther and farther away – making him realize that he has to range out there in order to find the birds he’s learning to love.

Pups that are bold and show a lot of range and independence will need to start off with the quartering lessons described above. In addition, as they advance in bird work, we teach what we call a “come around” command. With this exercise, we don’t want the bigger running dog to actually come back to us, but as he ranges out in a forward pattern to hunt (while still on the checkcord) we will give a “bobwhite” whistle call, pop the checkcord, and give a sweeping motion with our arm – in effect, telling him to “come around” and work closer – that’s far enough! Add the sweep of the arm to the whistle during quartering.

In teaching quartering lessons and the “come around” command, we do not use birds. We are concerned mainly with laying the groundwork for control in the future. Pups that are soft or more timid don’t need to have too much control, if any, instilled in them at the start. Bird work should come first for them, and later, control work.

The E-Collar’s Role in Ground Pattern and Range

For us, the use of an e-collar is never a part of a young dog’s first year on birds. We’ll let him drag a checkcord for as long as necessary and focus on control that way, rather than diminish or hamper a pup’s enthusiasm as he develops.

Later, if we have a young dog that needs more control in the field, the e-collar can be added – mainly as a reinforcement for the lessons already taught in quartering and “come around” training. It’s important to learn about the e-collar first and/or work with a knowledgeable trainer before you decide to use the e-collar. Overuse will result in other problems that may not be so easy to fix!

Take your time to research your pup’s genetics, plan what kind of range you’d like in your pointing dog, and determine what birds and places you want to hunt. Learn to read your pup’s temperament and abilities and don’t set a timetable on his training. Be sure to foster his inherent love of birds while developing his control and range, and you’ll have many years afield with your buddy! 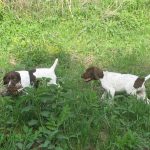 POINTING DOG POINTERS: Blinking – Is There a Cure?Feature 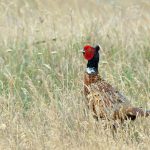